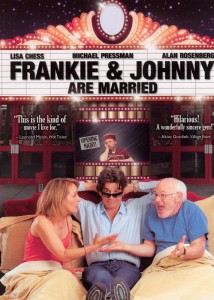 A fascinating blend of fiction and documentary, this feature by Michael Pressman chronicles his emotionally complicated LA production of Terrence McNally’s play Frankie and Johnny in the Clair de Lune. Pressman’s wife, Lisa Chess, costarred in the show with his old friend Alan Rosenberg, until difficulties with Rosenberg convinced Pressman to take over the part himself. These three and many other people (including Kathy Baker and Hector Elizondo) play themselves in the movie, which only begins to suggest the ambiguities Pressman exploits to the utmost. Emerging from all this is a fascinating look at the nuts and bolts of theater work and an often hilarious depiction of how personal neuroses help and hinder it. R, 95 min. (JR)