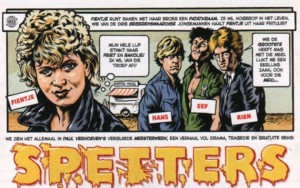 Paul Verhoeven gives exceptionally good audio commentary, especially on the Kino Lorber Blu-ray of Spetters (1980), a powerful feature about teenage motocross racers in a small Dutch town that I’ve just seen for the first time. Speaking in English, Verhoeven tells us a good deal about Dutch culture and life at the time his film was made; his own ideological motivations (such as his desire to depict accurately the behaviour of his young working-class characters) and personal contributions to the script (especially, but not exclusively, those relating to his early involvement with Pentecostal Christianity); his literary influences (in particular, the role played by Céline in conceptualizing the final sequence) and his strategies as a director (including the use of his own dog, who also turns up in The Fourth Man [1983]); his relations with his producer, his locations in and around Rotterdam, his cast and how he directed them; the differences between shooting in Holland and shooting in the US; the filming of stunts; his tricky dealings with Dutch government representatives to avoid censorship (which involved lying and subterfuge); the film’s disastrous initial critical reception, which had a lot to do with Verhoeven subsequently moving to Hollywood; and a great deal more.… Read more »