The Plain Truth [WELCOME TO THE DOLLHOUSE & NELLY AND MONSIEUR ARNAUD] 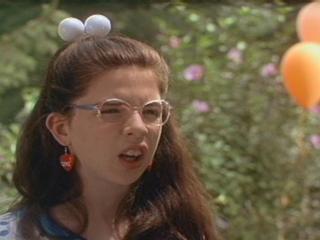 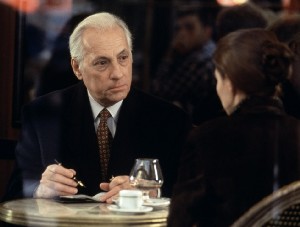 Welcome to the Dollhouse

Directed and written by Todd Solondz 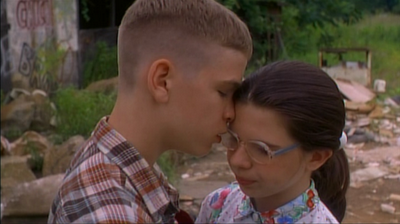 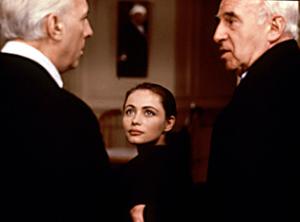 It’s hard to think of two stark depictions of blocked libido more dissimilar than Todd Solondz’s Welcome to the Dollhouse and Claude Sautet’s Nelly and Monsieur Arnaud. But they share at least one trait that deserves to be cherished — a trait that sets them apart from most other new movies. Both offer lively alternatives to the current lackluster, middlebrow exemplars of “literary” cinema — Cold Comfort Farm, The Horseman on the Roof, The Postman, Sense and Sensibility — clogging up our art theaters, beckoning us to feel more educated and civilized and thereby keeping out other movies that might address our everyday lives more directly. (I haven’t seen Moll Flanders, but I suspect that it and the horrendous Disney animated feature Hunchback of Notre Dame are mainstream versions of the same spreading disease.)

To be fair, all four of the pedigreed period pieces named have their merits, but they’re associated more with the illustrations and texts of coffee-table books than with the experience of reading novels and poems. The sad fact is that most Americans come away from public schools with an understandable hatred of “culture,” often accompanied by lingering guilt about this attitude, which leather-bound sets of the classics and movies like Sense and Sensibility are designed to assuage. It was both touching and saddening last year to see Miramax honcho Harvey Weinstein in one of his TV “documercials” for The Postman expound on what Pablo Neruda meant to him as a high school dropout, expressing the same sense of yearning deprivation that seasoned his ad campaign for Restoration, among other films, like popcorn salt. (It’s surely no coincidence that Miramax’s prize possession Pulp Fiction comes to us courtesy of another yearning high school dropout.) And as with salt, the aim is to perpetuate and exploit as well as satisfy one’s taste for the popcorn.

The excitements and satisfactions of the Solondz and Sautet movies are quite different — though the fact that Sautet and his movie are French probably confuses the matter for those who associate “French” with “culture.” I don’t think you could come away from either movie thinking “I’d like more of that” —  because they say things other movies don’t say and do things other movies don’t do and thereby fill genuine gaps. The political strength of Welcome to the Dollhouse — which periodically persuades the viewer to forgive its clodhopper style — rests partly on its depiction of the living hell of junior high school and its humiliations, especially for outcasts, an experience very few movies genuinely address. The novelistic detail of Nelly and Monsieur Arnaud has a comparable authenticity: rather than translate another writer’s experiences — Stella Gibbons’s, Jean Giono’s, Neruda’s, or Jane Austen’s — into a pretty postcard, the film registers the hard truth of one septuagenarian’s life. 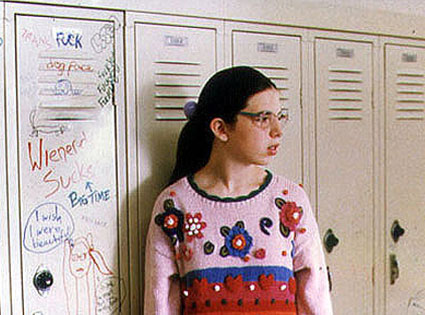 When I first encountered Welcome to the Dollhouse on video almost a year ago, I found it a quirky, troubled, but likable black comedy; alas, neither a big screen nor a live audience enhances its virtues. Much of the strident laughter I heard at a preview last week made me want to squirm, because it was as ugly in some ways as what I saw on-screen. Like the nervous, forced laughter I heard at some screenings of Roger & Me a few years back, this was the response of people stifling pain rather than releasing it. Solondz can’t entirely be blamed for this not wholly foreseeable response, though at times one wishes he had better control over some of the demons he sets loose. This obsessive movie, awarded the grand jury prize at the Sundance festival, may not quite live up to its advance billing; the subject is powerful, but the filmmaking often seems slapdash, and the final half hour dithers: stuck for an ending, Solondz comes up with several and even throws in a hectoring dream sequence.

At the center of his movie is an alienated, homely 11-year-old, Dawn Wiener (Heather Matarazzo), a persecuted seventh grader at Benjamin Franklin Junior High in the outer reaches of kitschy suburban New Jersey and the least favored, middle child in her family. Most of the movie is devoted to the awfulness of her life: the blatant favoritism of her mother toward her kid sister Missy, a hypocrite who runs around compulsively performing pirouettes in a tutu; the inchoate chaos of her sexual longings; and the nonstop cruelties of her teachers and fellow students. Solondz lays it on with a trowel, offering little respite. At best there’s a nice image of Dawn swaying euphorically to the strains of the title tune as it’s performed by her brother’s rock band in the family garage, with the hunk of her dreams playing lead guitar. The only response open to the viewer seems to be a grim, defeatist, derisive laughter at the trap Dawn is in, which the movie provokes at every opportunity. By the end of the film, when Dawn’s riding a bus with her classmates toward Disney World, the sense of doom has extended well beyond the New Jersey suburbs to envelop a world without escape or redemption. 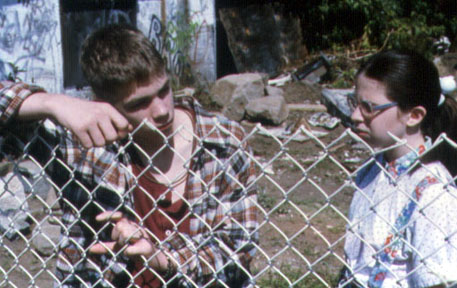 Reviewers have noted Solondz’s striking physical resemblance to Dawn, which indicates the depth of his identification with her. But though he displays her martyrdom to the point of hyperbole — even throwing in patches of lousy luck, such as her almost blinding a teacher while retaliating against some students tormenting her — he doesn’t make her a Goody Two-shoes or otherwise sentimentalize her. In some of the movie’s most chilling moments, she takes up the epithets hurled at her and her only friend, “lesbo” and “faggot,” and hurls them in turn at her kid sister and her friend. The first of these moments comes across as ludicrous, but the second shows Dawn to be capable of the same kind of brutality she’s subjected to. For Terrence Rafferty in the New Yorker such moments point to Solondz’s incoherent attitude, which in his mind ultimately makes Welcome to the Dollhouse a “hateful movie” that “grows steadily nastier and more hysterical.” But for me they’re lucid illustrations of how social persecution is eventually internalized in self-hatred, which is then redirected at others.

In the final analysis, Solondz seems less interested in handing out blame than in exposing the lineaments of a twisted world; and in this respect he fully succeeds — even if the portrait spills over at times into caricature, as it does with Dawn’s monstrous mother. (Dawn’s relationship with her nerdy older brother, which has moments of genuine shading, is much more believable.) The fact that he can’t seem to imagine any other world limits his film, but the shock of recognition it produces is strong: this film brought back the horror of my own days in junior high with unnerving force. 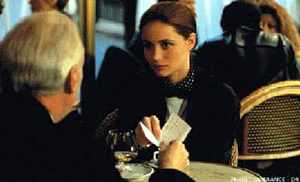 I can’t say I’ve previously been a fan of writer-director Claude Sautet, many of whose earlier works — The Things of Life (1969), Cesar and Rosalie (1972) — struck me as the epitome of well-crafted, genteel yuppie navel gazing, essentially foreign to me in its uncritical embrace of the upper middle class. Nor did his recent and accomplished Un coeur en hiver (1991) fully convert me. I suspect the split in opinion between Cahiers du Cinema and Positif, the two best-known French film magazines, over several directors including Sautet has had something to do with my bias. But now that I’ve been finding Positif superior to Cahiers, I’m more willing to reconsider Sautet’s virtues. (There’s clearly no contest between the 13-page section devoted to Sautet’s new film in last October’s Positif and the guarded if favorable two-page review in Cahiers.)

For all its mastery, Nelly and Monsieur Arnaud isn’t really a departure for Sautet; my liking for it is more a matter of catching up with his talents and overcoming some class and tribal prejudices. Watching the film is perhaps not so different from reading a John O’Hara novella about the business world, but I would still argue that the psychological and behavioral subtleties of the film are novelistic in a way that the movie adaptations of The Horseman on the Roof, Cold Comfort Farm, and Sense and Sensibility don’t even approach. Nelly and Monsieur Arnaud might even be called Jamesian in its attention to the subterranean emotional impulses of its two leading characters.

Nelly (Emmanuelle Beart) is a 25-year-old Parisian with a lazy, unemployed husband and a lot of debts. One day in a cafe she meets Monsieur Arnaud (Michel Serrault), the former lover of an older friend, Jacqueline (Claire Nadeau). When he hears about her debts, the elderly Arnaud offers to settle them, no strings attached. She politely refuses, but when she returns home that day she tells her husband that she accepted the offer and that she’s leaving him. Soon afterward Nelly allows Arnaud to pay her debts and goes to work for him typing and editing his memoirs; the rest of the film is given over to what passes between them. (If you don’t want to know the remainder of the plot, skip the next paragraph.) 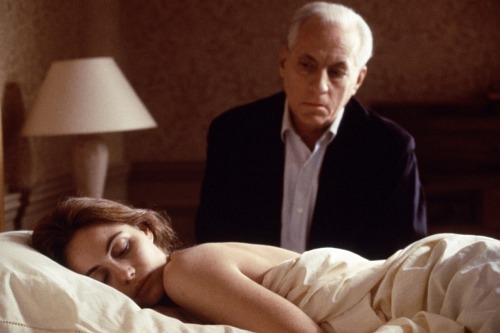 Their highly charged relationship never turns into an affair, despite the generic expectations that might lead us to suspect otherwise. Nelly does have a short-lived affair with Arnaud’s editor (Jean-Hugues Anglade), which leads to tensions in her dealings with Arnaud; but this movie never founders on obvious points (in which respect it’s the reverse of Welcome to the Dollhouse). Indeed, what transpires between Arnaud and Nelly is a long dance of flirtation that climaxes in his watching her sleep in one of his spare rooms. Shortly afterward, when the husband of his ex-wife (Francoise Brion) dies unexpectedly in Switzerland and she comes to him in Paris for solace, he makes a sudden decision to go with her on a long trip to the American northwest to visit their grown son — thereby removing himself from a situation that would only exacerbate his passion for Nelly.

Arnaud has a complex and perhaps shady past, which the movie only partly sketches in. Once a judge in a French island colony, he later became a businessman. He’s estranged from his ex-wife and from his two grown children. And he occasionally meets with a mysterious former colleague, Dollabella, who may be blackmailing him. (Dollabella is played by the ubiquitous and accomplished English-American actor Michael Lonsdale, who’s worked for everyone from Orson Welles to Jacques Rivette to James Ivory to Joseph Losey. In this film he’s given a special, witty credit emblematic of his character and his career in general: “With the fugitive participation of Michael Lonsdale.”)

Despite its sketchiness, the film’s portrait of Arnaud carries a lot of weight and conviction. Part of what’s impressive is Sautet’s exquisite sense of proportion and balance: though Arnaud is roughly the same age as he is, Sautet treats Nelly every bit as fully and sympathetically. One never feels that she’s merely being presented to us through Arnaud’s eyes. Her character and life, like Arnaud’s, is suggestive — we’re given her dislike of her mother, for instance, but no clear reasons for it.

It’s one sign of Sautet’s success that, though he presents neither character as especially admirable or exceptional, he makes us care about them a great deal. Their dignity and mystery register the way the dignity and mystery of real people and real lives do — as cumulative masses of small observations. Novels generally do a better job of gathering and conveying these observations than movies, but this film’s an exception.