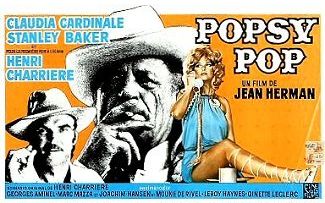 Guiana. Plateau, Venezuela. In a ramshackle ‘boom town’, occupied by the natives who work the local diamond mine, the glamorous Popsy Pop arrives –ostensibly to divert the workers with her sexy cabaret act, but actually in order to distract Silva, the mine-company inspector, from a two-million-dollar diamond heist planned for the night of her arrival. Masterminded by Marcou, an ageing criminal who loves Popsy Pop, and carried out with the help of his henchmen Tormenta, Blanchette and Freddy -– who pilots the getaway helicopter — the robbery proceeds as planned: Silva is knocked unconscious in the singer’s dressing room and the diamonds are taken from the company office. But Popsv Pop and Freddy betray the rest of the gang by leaving without them. The angry workers kill Blanchette and Tormenta, but Silva persuades them to spare Marcou in the interests of recovering the diamonds — and offers the latter a cut of the reward in addition to a chance to avenge Popsy Pop’s double-cross. She has meanwhile taken a plane to Santa Domingo with Freddy, and places the diamonds in a safe deposit box, hiding the key in a jar of cold cream.… Read more »