Review of FOR THE LOVE OF CINEMA 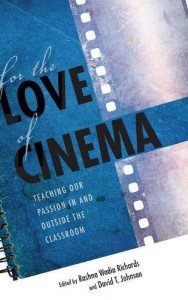 As a cinephile who periodically teaches film courses, I might be considered an ideal reader of this collection of essays, but in fact I’m not. In order to fully qualify, I’d also have to be an academic. Being a confirmed outsider to that world, however, without the sort of degrees to ensure my survival there, I have to approach this volume more as a scavenger, looking for what I think I can use, rather than as a member of the particular community that this book addresses, someone speaking their language and sharing their issues. More specifically, my best and most recent teaching experience has been four two-week stints at Béla Tarr’s Film Factory between 2013 and 2015, when the academic Sarajevo Film Academy still allowed it to function and before it withdrew its financial support for a school, as well as a training ground and production facility for young filmmakers. At the Film Factory, cinephilia was most often a given rather than a desired condition to be generated or propagated, and films more than grades or diplomas were the desired objectives.

Even so, Richards and Johnson’s objective to bring love to their teaching is close to my heart, and the dozen essays they’ve gathered cover some distance in responding to that impulse. This is especially true in their co-authored and movingly articulated Introduction, ”Love and Teaching, Love and Film,” and the first of their two sections, “Theorizing Cinephilia and Pedagogy,” where Robert B. Ray, one of their gurus, ushers in further passionate explorations and speculations by Amelie Hastie, Thomas Leitch, Tracy Cox-Stanton, Kalling Heck, and the team of Adrian Martin and Cristina Álvarez López. There’s also much of value in their second section, “Practicing Cinephilia and Pedagogy,” especially in the commonsensical teaching suggestions of Steven Rybin about performance, Allison Whitney about exhibition, Lisa Patti about digital options, and Timothy Yenter about combined studies of film and philosophy, but also in contributions by Kristi McKim and Andrew Utterson.

Yet the process of reading all of these dozen essays consecutively entails a certain dissipation and draining off of the passions declared in the Introduction. The same touchstones — Susan Sontag’s overrated and to my mind ill-considered “The Decay of Cinema” (limited, in spite of Sontag’s highly sophisticated film taste, by a refusal to consider digital home viewing even as a remote possibility) and even Christian Keathley’s more substantial Cinephilia and History, or The Wind in the Trees — and the same academic jargon tend to deaden the nerves when one keeps re-encountering them. Part of the freshness of Yenter’s final essay derives from his avoidance of such clutter for the sake of his own arguments, delivered in a plainer language. For the same reason, the relatively jargon-free discussions of Leitch, Cox-Stanton, and Martin and Álvarez López are refreshingly direct even when their premises are somewhat harder to process (e.g., Leitch’s avowal that “Teaching the same movies over and over is a joy, but watching them over and over is a challenge,” or Martin’s working assumption that the liberation he feels as a critic in switching from written criticism to audiovisual criticism necessarily entails a similar liberation and broadening of options for us).

So it’s likely that my waning interest in this book’s second section comes from the cumulative impact of a tranquilizing academic discourse, even when this is supposed to describe various methods of enlivening students and materials. For accomplishing the latter, I much prefer Cox-Stanton’s breezier and freer account of her own practical experiences as a teacher — her enthusiasm for Girish Shambu’s The New Cinephilia and Catherine Grant’s “Film Studies for Free” blog, or her citation of Robin Wood’s identification of a late 1980s Hollywood trend, “the curious and disturbing phenomenon of children’s films conceived and marketed largely for adults” (which perfectly describes the latest Best-Picture Oscar winner, The Shape of Water, making this observation especially timely). 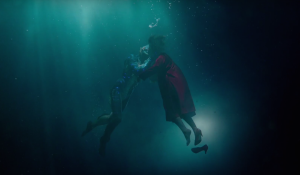 I think the nub of this problem is the contradictory determination of various professionals to make the more amateurish highs and lows of cinephilia respectable as well as useful. Like the even more doomed effort to academicize the outlaw traditions of midnight movies as a teachable subject, this involves sneaking disreputable and adversarial elements into the classroom as a way of sparking the interest of both students and teachers, a practice that risks various forms of adulteration, compromise, and distortion. (The last time I made the mistake of participating on a panel at a Society for Cinema and Media Studies conference, it was one about midnight movies, where I recoiled at the use of the term “Indywood” by a co-panelist. This was clearly a term designed to obfuscate the meaning of the term “independent film” with the same triumphant glibness as Harvey Weinstein, the Sundance Festival, and The New York Times in its uncritical support of both — before the Times belatedly decided that Weinstein’s behavior as a sexual predator, unlike his multiple artistic crimes, disqualified him as a Cultural Commissar — thereby undoing much of what I had been trying for many years to accomplish as a journalist.)

But there are more sympathetic examples one could mention of employing outlaw strategies. For instance, Robert B. Ray’s recourse to Surrealism and its “devices of games, fragmentation, and collaboration” as a sort of pedagogical shock tool in “Cinephilia as a Method” (as in such Ray books as The Avant-Garde Finds Andy Hardy) offers one set of bracing alternatives to the usual academic reflexes. Concentrating on defamiliarizing techniques to subvert the seeming overfamiliarity of It Happened One Night and It’s a Wonderful Life, Ray also argues — as he recalls a recalcitrant graduate student who failed to respond to Howard Hawks’s Air Force — if you can only detect film style in [Michelangelo Antonioni’s] L’Eclisse, you resemble a doctor who can recognize an illness only when its symptoms have reached the critical stage.”

This is far from the only occasion when some form of cinephilia is regarded as a form of illness, even if it’s most often seen as a benign form. In her “Nearing the Heart of Film: For a Cinephilic Pedagogy,” Cox-Stanton cites approvingly a statement by Nicole Brenez on behalf of film analysis that privileges “visual and acoustic” properties over narrative and the use of a film to serve a predetermined methodology, because the latter “[consider] films as symptoms, but they never reach the illness.” “Undoubtedly, cinephilia begins here,” Cox-Stanton adds, “recognizing that films are made with things before we begin to imagine how they might also be about things.”

This reminds me in turn of an argument once made about cinephilia by Peter Wollen—included in his “An Alphabet of Cinema” (New Left Review, November–December 2001), and cited by me on the final page of Movie Mutations: The Changing Face of World Cinephilia, another collection on the subject, co-edited by myself and Adrian Martin in 2003: “To Serge Daney, looking back, cinephilia seemed a ‘sickness,’ a malady which became a duty, almost a religious duty, a form of clandestine self-immolation in the darkness, a voluntary exclusion from social life. At the same time, a sickness that brought immense pleasure, moments which, much later, you recognized had changed your life. I see it differently, not as a sickness, but as the symptom of a desire to remain within the child’s view of the world, always fascinated by a mysterious parental drama, always seeking to master one’s anxiety by compulsive repetition. Much more than just another leisure activity.”

This suggests that, much as the validation of The Shape of Water factors in a desire to remain a child and an adult at the same time, For the Love of Cinema takes on the related task of proselytizing on behalf of teacherly love that is tempered with both a childish enthusiasm and a grown-up pedagogical detachment, at least insofar as such a thing is both desirable and achievable. Like many of the other aspirations of our twisted society, it dreams of working both sides of the street and thus fails almost by definition —  yet it does so honorably and instructively. — Jonathan Rosenbaum