The Good, the Bad, and the English [DEAD AGAIN] 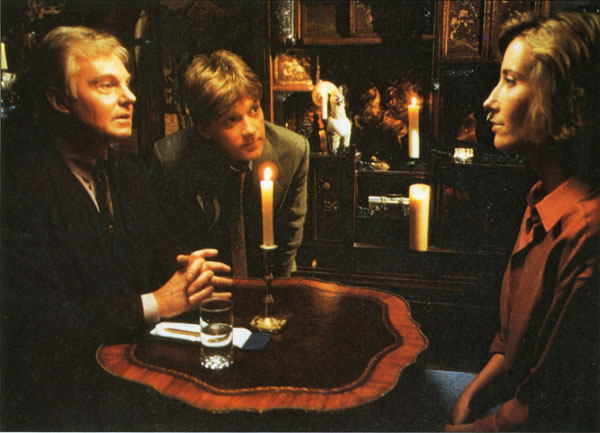 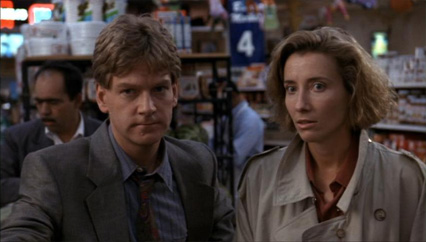 The most instructive evening I’ve spent in the English theater was the first time I went, in the mid-60s, to a series of three one-act plays written by and starring Noel Coward called Suite in Three Keys, which may well have been Coward’s last stage appearance. In retrospect, what seemed so peculiarly English about the whole experience was the communion that existed between Coward and his audience. The plots of all three plays were negligible and the repartee more standard-issue than brilliant. All that really mattered, it seemed, was the mysterious intimacy, the almost conspiratorial rapport between Coward and his public, which had more to do with personality than with narrative, character, or even performance in the usual sense. The overall effect seemed to have a lot more to do with entertainment than with art; the feeling was much closer to that of patrons crowded around a piano in a pub than to theatergoers pondering lofty questions like the meaning of life.

This rapport came to mind on viewing Kenneth Branagh’s second movie, Dead Again. At first glance, the nationality of Dead Again is an open question. It’s an American studio release scripted and produced by Americans and set in Los Angeles. Directed by an Englishman, it features three English actors — Branagh, Emma Thompson, and Derek Jacobi — in the principal roles; Branagh and Thompson play two roles apiece, and only one of these four roles is English. Why bother about whether Dead Again is English or not? I think it matters, finally, because the line that’s drawn between art and entertainment in this country is different from the one drawn in England. In this country any distinction — specious or otherwise — that may have existed between art and trash up through the 50s was torn asunder in the 60s by the combined forces of movie auteurism, artistically self-conscious rock, and camp taste (among other influences), followed by the Mixmaster blends and confusions of postmodernism in the 70s and 80s. The result is that now practically everything from Barton Fink to MTV is treated like “high art” and “entertainment” is used strictly for things like TV game shows and sitcoms. But in England simple entertainment is given a somewhat wider berth. Diversion doesn’t require the trappings of “serious” art in order to be treated with deference. Graham Greene may have divided his novels between his more “serious” ones and his “entertainments,” but both have tended to be valued by English readers for their entertainment value, and the thrillers aren’t disparaged because they don’t aspire more to “art.” I doubt that many of the people in Noel Coward’s audience were bothered about whether or not what they were watching was “art,” either. By contrast, as J. Hoberman has implied, the recent reprinting and repackaging here of noir novels (by Jim Thompson, David Goodis, and others) as if they were high-toned masterworks seems to suggest that trashy entertainment can now be taken “seriously” in our culture only if it’s tarted up to resemble a night at the opera.

In any case, Dead Again can be regarded as either failed art or successful entertainment, as heavy straining or light sendup — even as “pretentiously unpretentious” or “unpretentiously pretentious” — all depending on which national lens it’s seen through. The first time I saw the movie, I took it as a trashy American-style entertainment that ultimately strangled on its own excesses as it lusted after “artistic” credentials — rather in the manner of a Brian De Palma film, albeit with less evidence of sincerity or personal conviction. The second time I saw it, I took it more as a kind of coded sport between Branagh and his English viewers, which made it seem no less disheveled but somewhat more comprehensible. Clearly Branagh has arrived on our shores weighted with the baggage of his associations with English theater and Shakespeare. For people who consider his Henry V an art movie simply because it’s Shakespeare, there’s something rather disconcerting about his turning next to material that’s closer to Daphne Du Maurier (in atmosphere) and Agatha Christie (in trickiness). This uneasiness is related to our peculiar 20th-century notion that Shakespeare belongs to rarefied “high” culture rather than to popular “low” culture (a bias that, as we’re reminded by Lawrence W. Levine’s fascinating Highbrow Lowbrow: The Emergence of Cultural Hierarchy in America, is very different from the way Shakespeare was experienced here during the first half of the 19th century). The fact that the English are more able than we are to relish the pop side of Shakespeare — the low comedy and the hammy grandiloquence that was enjoyed more readily by our American ancestors — suggests that Branagh may be more of an entertainer and less of a highfalutin artist than our built-in cultural biases automatically assume him to be. From this point of view, apart from Henry V‘s infinitely better script material, Branagh’s two movies are reasonably compatible. 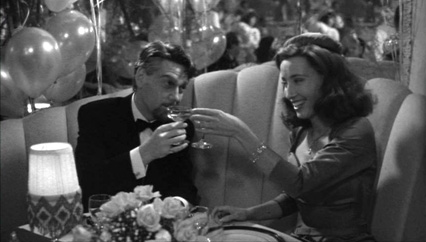 On the other hand, it’s also possible to regard Dead Again as a rather disingenuous form of slumming: setting out to beat the Yanks at their own game, Branagh hurls thunderbolts of flashy effects at his audience and cares only tuppence for the content. (His witty first appearance in the movie as an American detective smacks of in-joke and subterfuge: he’s parked in a convertible and speaking on a cellular phone when a passing truck driver calls out that he’s parked on the wrong side of the street.) His movie is lots of fun, the narrative gripping if convoluted, but when the postponed revelations and messages finally come crashing to the fore, it’s every bit as silly and only about half as convincing as Field of Dreams or Ghost — two movies, by the way, that were significantly developed by a coproducer of this movie, Lindsay Doran.

A pivotal moment toward the end points up the nonseriousness of the proceedings: When some of the characters enter an artist’s studio, practically the first thing we see is a duplication of Salvador Dali’s famous melted-watch painting, here with a pair of gold scissors — a major visual and narrative motif throughout the movie — kitschily added to the familiar elements. Shortly we see all sorts of other artworks involving scissors in the same room. The gag collapses and ridicules the minimal coherence of the fictional world that the film has established up to this point, and the fact that Branagh is so eager to use it suggests how lightly he takes that coherence. 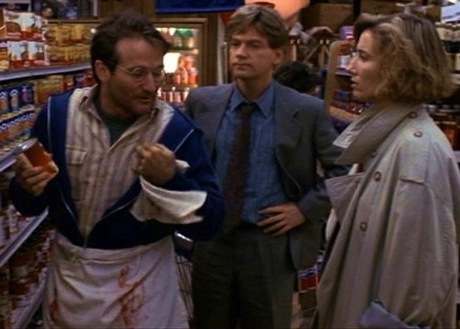 Most of the pleasure of Dead Again depends on the unraveling of its mysteries, so I’ll just say briefly, for the record, that it involves an amnesiac American woman (Emma Thompson) with recurring nightmares, an American detective named Mike Church (Branagh) who more or less adopts her, a newspaper photographer (Wayne Knight) who helps them out, a former psychiatrist working in a supermarket (Robin Williams) who serves as the detective’s occasional guru, and an English antique dealer (Derek Jacobi) with a talent for hypnosis. When the antique dealer hypnotizes the woman, we see her flashbacks in black and white; recapitulating her nightmares, they involve another set of characters in Los Angeles: an English woman (Thompson) who falls in love with and marries a German composer (Branagh) who apparently murders her, a German housekeeper (Hanna Schygulla) and her son who live with the composer, and a reporter of obscure nationality named Baker (Andy Garcia). (There are some indications that the reporter is supposed to be English, but Garcia’s clotted accent sounds vaguely Eastern European.) 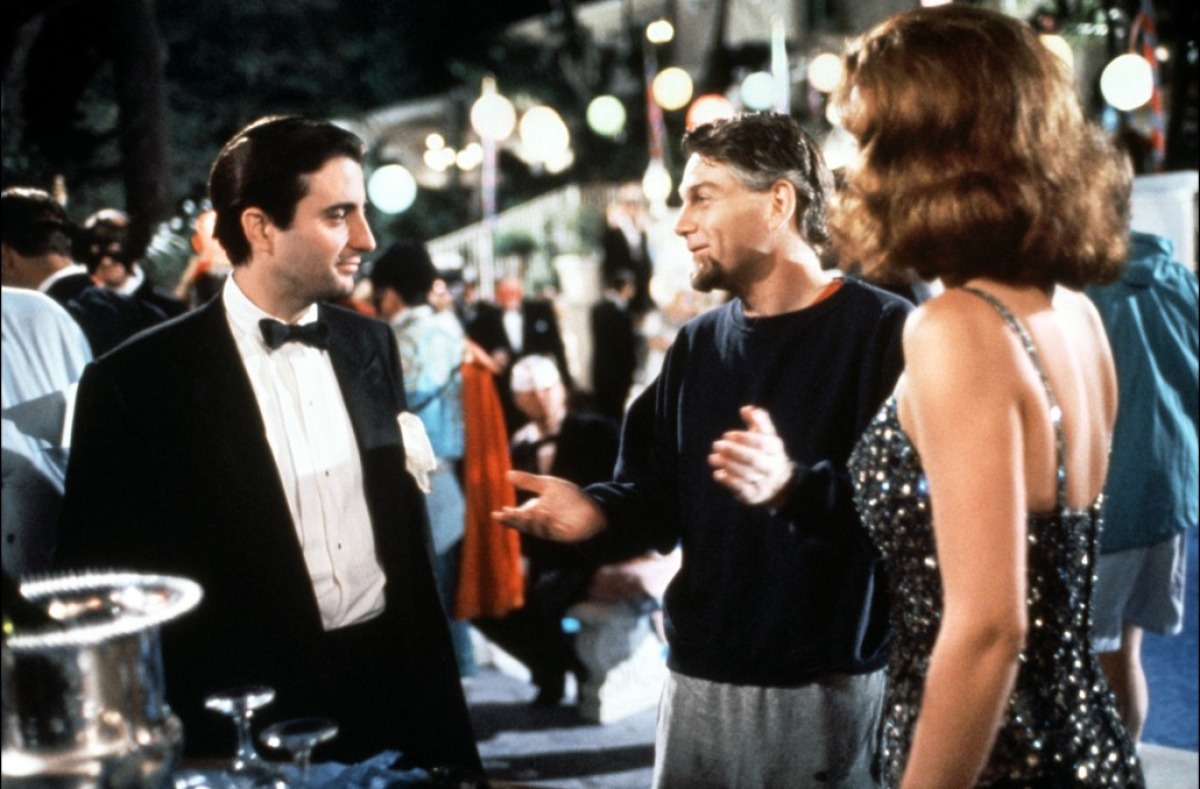 What ensues involves reincarnation, the eventual reduction of at least three of the more interesting characters to simple narrative props, surprises involving the identities of three other characters, a cornball love story, and a lot of stylistic fancy footwork — particularly intercutting between the two plots — that alternately serves to obfuscate and elucidate what’s going on. Some of this climactic intercutting is impressive in terms of narrative economy but ultimately rather superfluous in terms of both exposition and drama; it registers as virtuosity taking place in a void. By the end, we’re more likely to be exhausted by the formal gymnastics than moved or persuaded by what the story is saying. This is because Branagh has basically been treating the story as one would a libretto — a disposable vehicle designed simply to inspire and showcase melodies (i.e., the performances and the mise en scene).

The fact that Emma Thompson is married to Branagh in real life adds a strain of subtextual meaning to the stories of both of the movie’s romantic couples that ultimately counts for more than the stories themselves, and there are other in-jokes that function even more esoterically. Dead Again doesn’t add up to much as a mystery story either. It reminds me of something Edmund Wilson once said after reading one of Rex Stout’s Nero Wolfe novels, in one lengthy magisterial sentence of complaint: “I finally got to feel that I had to unpack large crates by swallowing the excelsior in order to find at the bottom a few bent and rusty nails, and I began to nurse a rankling conviction that detective stories in general are able to profit by an unfair advantage in the code which forbids the reviewer to give away the secret to the public–a custom which results in the concealment of the pointlessness of a good deal of this fiction and affords a protection to the authors which no other department of writing enjoys.” Worst of all, the movie cheats so outrageously that the viewer can’t pick up clues and match wits with the detective in classic mystery fashion; one simply has to agree to go along for the ride and agree to be surprised. At least half of the revelations of the plot prove to be capricious and irrelevant, and perhaps another third are never adequately explained. But if sheer diversion is what you’re after rather than art that means something, there’s little doubt that Dead Again will keep you happy — even if you never do figure out what the title is supposed to mean. You certainly won’t be starved for personality.