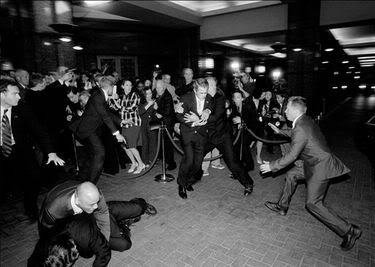 1. Look at novels written from Don Quixote all the way through much of the 19th century, and you’ll find spoilers even in the chapter titles — headings that habitually tell you what’s going to happen before it happens. Hell, Pynchon  pays tribute to that practice himself  in his own first novel, V. How come nobody complained much about this practice for a good three centuries before it started getting readers and moviegoers so hot and bothered — mainly, it would appear, over the past decade? And what about the titles of certain plays? Should William Shakespeare have been horsewhipped by Elizabethan audiences for calling one of his comedies The Taming of the Shrew, thus giving away the outcome of the story? And what about Death of a Salesman?

2. The whole concept of spoilers invariably privileges plot over style and form, assumes that everybody in the public thinks that way, and implies that people shouldn’t think any differently. It also privileges fiction over nonfiction (although Terry Zwigoff actually once complained about some reviewers of his Crumb including the “spoiler” that Robert Crumb’s older brother, Charles, committed suicide), and I’m not clear why it necessarily should. Why is it supposedly a spoiler to say that Touch of Evil begins with a time bomb exploding but supposedly not a spoiler to say that the movie begins with a lengthy crane shot? Is it a spoiler only to say that Dorothy travels from Kansas to Oz, or is it also a spoiler to say that The Wizard of Oz switches from black and white to color?

To be totally irresponsible and give a really big spoiler to Gilbert Adair’s very enjoyable The Act of Roger Murgatroid: An Entertainment — his latest novel, an Agatha Christie pastiche that you’ll have to order from England as I did if you’re an American who wants to read it  — the surprise ending isn’t so much the identity of the murderer as it is the revelation that he’s been narrating the entire novel in first person, just like Christie’s Roger Ackroyd. This is something we haven’t previously realized because Murgatroid, hiding under a different name, hasn’t gotten around to using the first person until the final scene, so we’ve been assuming all along that what we’ve been reading has all been in third person. 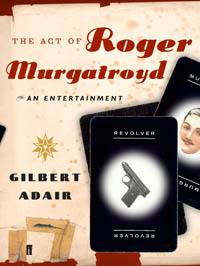 The same novel, incidentally, has a wonderful epigraph, from Raul Ruiz: “The real world is the sum total of paths leading nowhere.” Metaphysically, I find this every bit as entrancing as the epigraph for Against the Day, credited to Thelonious Monk: “It’s always night, or we wouldn’t need light.” . . . Am I guilty just now of subjecting the readers of both novels to spoilers regarding these epigraphs? How can I dare I give away the delightful surprise of reading these sentences on the first pages of both books!

3. One thing that drives me around the bend about spoilers is that it’s impossible to function as a critic if one can’t describe anything in a movie or a book in advance. So if I’m expected to write a review of something, am I also expected not to analyze it?

4. The weird metaphysical implication of spoilers is that moviegoers and readers who fret about them want to regain their innocence, perhaps maybe even their infancy, and experience everything as if it were absolutely fresh. From this standpoint, we shouldn’t even know what films we’re going to see in advance, or who stars in them, or who directed them, or what they’re about, or perhaps even where they’re playing. Just so we can experience the bliss of being taken there by benevolent parents.