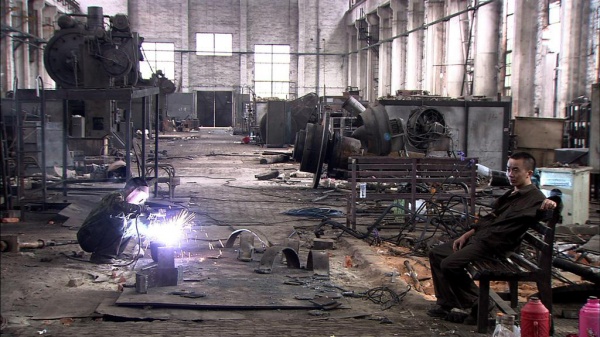 Chengdu from the secret manufacture of military aircraft engines in 1958

to, after the Vietnam War, a downsized and remodeled facility producing

consumer products, and then, more recently, into a privately owned

straightforward, but because it’s a Jia Zhangke film, it qualifies as an

adequate description only in the most skeletal fashion. Factory 420

employed almost 30,000 workers, so a lot of life experience and

displacement is involved in this multifaceted story — a good half-

century of Chinese history. And Jia is so desperate to discover the

everything, including artifice, if this will bring him any closer

to what urban renewal is the process of quickly obliterating.

The theme of his film — of all his features to date, in fact — is

the displacement coming from historical upheavals in China

and the various kinds of havoc they produce: physical, emotional,

societal. And sometimes the style involves a certain amount of

displacement as well, such as when he cuts from a speech in late

over the same speech, with one figure climbing the steps on two

Jia addresses his ambitious theme by mixing documentary and

fiction, a procedure he’s been developing in various ways

throughout his career. It’s apparent here in the uses of music as

well as in the mix of actors and nonactors, in both the mise en scène

and the editing. But of course, blatant employments of theater and

fiction, of pre-arrangement and construction, have informed

simply to assert that “capturing reality” is the aim; there are always

other agendas, and teasing out those agendas is partly a matter of

filmed workers leaving their own factory in 1895, using a stationary

simply “actuality” but also a form of surveillance. And by the time

Robert Flaherty makes Nanook of the North (1922), the mixture

of modes has become still more complicated. In the film’s first extended

sequence, Nanook the Eskimo in his boat paddles to the shore and

disembarks, performing the equivalent of a circus act in which many

of his family from the boat’s concealed interior: several children, his

wife, the family dog. Documentary, in short, is a form of show business

from the very outset, something constructed as well as found.

into performance art,” we should acknowledge that Jia is being both

innovative and experimental in one sense and highly traditional and

commercial in another. Even if he’s being more obvious about the

arranged and/or fictional elements here than the Lumières or Flaherty

were — by utilizing four professional actors and four actual factory

workers for the eight interviews featured in this film, as well as a

cowriter, Zhai Yongming, who comes from Chengdu — he is none the

Jianbin, Joan Chen, and Zhao Tao are all recognizable as movie actors

to Chinese viewers. So the unconventional ways these actors are used

has to be weighed against the various commercial benefits derived

from their presence. In fact, although Jia started making features with

biggest commercial success in China to date, surpassing both The

Let’s consider each of the roles played by these actors, as well as

the overall historical development implied by the order in which

they appear — a pattern that was carefully traced by James

he placed this film at the head of his annual ten-best list. Lu Luping,

joined the factory the same year it opened, when she was 21. Her

stop during her journey by boat from Shanghai to Chengdu —

whether this is a “real” story derived from an actual interview,

a fiction, or something in between — followed by her watching

an old propaganda film on TV, painfully dramatizes the degree

to which nationalist and military obligations could supersede

family in 1958. This is in striking contrast to the final interview

who voices a very different kind of nationalist sentiment when

she defends her capitalist career as a “personal shopper” who

has purchased a new car to enhance her “credibility”, and who

tearfully says she wants to buy her factory-worker parents an

apartment in the new 24 City development. (It’s important to

recognize that while westerners tend to view communism as

“collectivist” and capitalism as “individualist,” the Chinese state

transformation as a particular form of civic duty.) And in

between these polar extremes are the monologues delivered

an assistant to the factory’s general manager, seated at a counter,

who recalls street-gang fights and having been spared from one

eponymous heroine of one of Chen’s earliest films, who plays on

audience recognition by discussing her close resemblance to Joan

Chen. If the latter registers as a joke, it’s a joke with some serious

aroused by these monologues to echo those solicited by the same

actors in fiction films, and he also wants the viewers to be aware

of these echoes. And clearly the juxtapositions of nationalist

consciousness with both street fights and business, as

emphasized in these latter two monologues, are part of the

ambiguities and ambivalences that Jia is intent on exploring,

with pop culture and state policy both playing relevant roles.

It’s important to add that the performative role played by

nonactors is no less important to the film’s feeling and

design than the performances by the actors, and not

simply or necessarily because they’re always closer to

“the truth”. (Some of the formal poses of the portraits of

workers are made to seem more artificial than some of the

staged and written monologues, and the periodic fades to

black, disrupting the flow of the interviews, discourages us

from taking them as seamless documentary or fictional

bus, may have more to say about displacements, family

separations, and job loss than anyone else in the film, and

her final statement, which Jia repeats as an intertitle —

“If you have something to do, you age more slowly” —  is

clearly one the key lines.

financing of 24 City came from the “24 City” development

itself, much as the theme park which The World both

explores and deconstructs also helped to finance that film.

So there are multiple agendas at work here, some of them

seemingly in conflict with one another, and the desire to

experiment is tied to a kind of ideological juggling act that

has made some Chinese viewers weep during portions of

this film (reportedly, especially during the final sequence),

but has also worried some critics, Chinese and western alike,

about some of the implicit compromises and cross-purposes

involved in such an enterprise. But Jia has been a ambitious

risk-taker throughout his career, and the topics as well as the

emotions that he chooses to take on here are, perhaps by

necessity, as ambiguous and as open-ended as China itself. 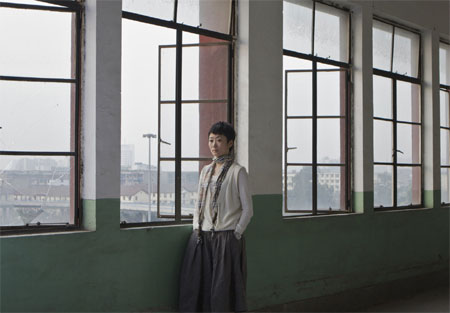