Last month, roughly thirty-five years after its publication, the small, Denver-based publisher Arden Press finally declared my book Film: The Front Line 1983 out of print, with 192 copies remaining in stock. A commissioned work designed to launch an annual series surveying independent and experimental filmmaking, it yielded only one other volume after my own, David Ehrenstein’s equally useful Film: The Front Line 1984— which, like my book, can still be readily found at bargain prices at Amazon and elsewhere. 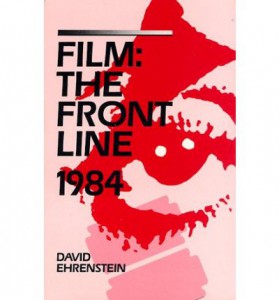 I have somewhat mixed feelings about some of the disgruntled patches of score-settling and related polemics in my book, although there are other patches that I still like. A few chapters have already been posted on this site, and I expect that others will follow.

To the best of my recollection, I found copies of this book on the shelves of only two bookstores: the long-gone Coliseum Books (1974-2007) just below Columbus Circle in New York, the same year (1983) it was published, and the first bookstore I ever walked into, quite at random, in Melbourne–still recovering from jetlag, and not quite believing my eyes–on the first of my three visits to Australia, in 1996. I’m sorry that I no longer remember the name of that store, because it certainly made my day. [1/31/2018]