Potamkin (in more ways than one, a preliminary report)

It’s hard to think of a major American film critic who’s more flagrantly neglected than Harry Alan Potamkin (1900-1933), a globetrotting Marxist poet and intellectual whose prodigious output as a critic, found in the over 600 pages of The Compound Cinema (New York and London: Teachers College Press [Columbia University], 1977) — a posthumous collection edited by Lewis Jacobs — covered only the last six years of his life (1927-1933). 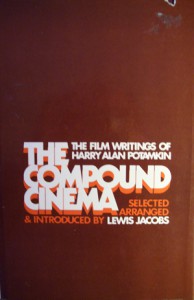 It seems that this neglect can be attributed to such interlocking factors as Cold War mentality (Potamkin was a Communist, albeit not a Party member), anti-intellectualism, pro-Hollywood bias, and a reluctance to deal with silent cinema, all of which place Potamkin firmly at loggerheads with the overrated Otis Ferguson (1907-1943), who typically gets thirty pages in Philip Lopate’s boringly mainstream American Movie Critics anthology versus Potamkin’s measly eight. But Potamkin, who could be as witty as Ferguson on occasion, was also an angry polemicist who made a few enemies (check out his vitriolic pan of Shanghai Express as racist and fascist claptrap, for New Masses, or see Jay Leyda’s rave review of The Compound Cinema), which probably didn’t help matters. Whatever the causes, the fact that I can’t even find a photograph of Potamkin on the Internet (including the one by Irving Lerner included in The Compound Cinema) or a Wikipedia entry for him seems entirely characteristic.… Read more »