The Example of KATZELMACHER

This is the last in a series of four essays I wrote in 2008 about Fassbinder films for Madman, the Australian DVD label. The others, on The Bitter Tears of Petra von Kant, Ali: Fear Eats the Soul, and Martha, have already been posted on this site. — J.R. 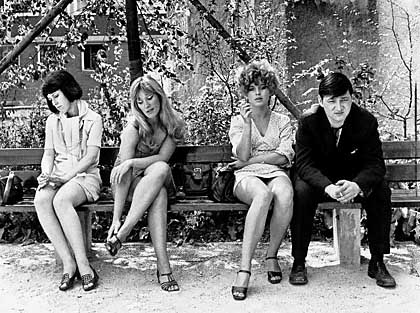 Katzelmacher is only the second feature of Rainer Werner Fassbinder, yet the gulf that separates it from its predecessor, Love is Colder Than Death, is enormous. His first feature, shot over 24 days in April 1969, was later described by its writer-director as the first of his “cinema” films, apparently because its minimal story about petty gangsters seems conceived in relation to genre films. It premiered at the Berlin Film Festival in June, where it was roundly booed and received mixed reviews; it seems fairly safe to conclude that if Fassbinder had made nothing else, most of us would never have heard of him.

This is no doubt why Fassbinder’s somewhat mysterious epigraph for Katzelmacher, credited to his friend and collaborator Yaak Karsunke, reads like a directive to himself: ”It’s better to make new mistakes than to perpetuate the old ones to the point of unconsciousness.” Another directive, more ironic, crops up in one of the film’s final lines of dialogue — “We need a bit of order here” —- which has formal as well as political implications.

Katzelmacher was shot over a mere nine days in August 1969, and was subsequently described by Fassbinder as the first of his “bourgeois” films —- apparently because its own minimal story about lower-middle-class characters when they aren’t working seems conceived in relation to life and not other movies. It premiered at the Mannheim Film Festival in October, where it received no less than seven prizes, and one can conclude, paradoxically, that it remains Fassbinder’s most avant-garde film as well as one of his most commercial. Financially speaking, one could even call it a smash hit: the film cost 80,000 DM to make and eventually earned 650,000 in prizes and another 350,000 in retroactive subsidies.

Indeed, the film is full of paradoxes, including a capacity to fulfill what might be described as opposite ideological agendas —- simultaneously (a) exposing and attacking the racism, xenophobia, intolerance, sexism, hypocrisy, and casual violence of its swinish characters, especially after a Greek worker (played, uncredited, by Fassbinder himself), another less than noble character, turns up and gets exploited and abused by them, and (b) celebrating and relishing all these selfsame traits and characters —- that is, finding them hilarious and even lovable in some twisted fashion. It’s a neat trick to pull all this off, and one that even encapsulates to some degree the contradictions in Fassbinder’s subsequent career.

It’s an aesthetic and ethical position that can be traced in part to some of the early features of Claude Chabrol, one of the three contemporary filmmakers (along with Eric Rohmer and Straub) that Fassbinder’s first feature was dedicated to. Coincidentally, the best exposition of Chabrol’s position can probably be found in an interview with Luc Moullet that was published in Cahiers du Cinéma during the same month that Katzelmacher was premiering in Mannheim:

“…It was Chabrol who inaugurated at the start of the 60s a sort of critique of stupidity that represented at the same time [this effort] I spoke of to move toward it…What I like about La Ligne de démarcation, for instance, is precisely the absence of a line of demarcation. One’s in a perpetual uncertainty, and that’s what interests us: we don’t know what the true direction of the film is, and we obviously can’t know because there isn’t one. Whereas I don’t find that [other Chabrol] films like Les Biches or La Scandale are closed in a vicious circle of stupidity—-they’re simply films of an immense laziness.” (Cahiers du Cinéma no. 216, octobre 1969, my translation)

It’s symptomatic of Fassbinder’s talent for meaning different things to different viewers that there have been almost as many explanations of his title, a Bavarian slang term, as there have been critics of the film. According to the late Vincent Candy in the New York Times, it means “troublemaker”; the excellent online critic Acquarello translates it as “cockmaster”; and a monograph from New York’s Museum of Modern Art insists that it means “cat-screwer”. But the two most plausible glosses come from Fassbinder himself, as reported by Tony Rayns (“a foreigner, especially someone from the South, who is supposed to enjoy great sexual potency”) and Martin Chalmers, the translator of Fassbinder biographer Christian Braad Thomsen (“literally, little-cat-maker”).

Katzelmacher’s immediate source is a forty-minute play of the same title, written by Fassbinder and codirected by him and Peer Raben to round out a program with Jean-Marie Straub’s radical ten-minute condensation of Ferdinand Bruckner’s three-act Sickness of Youth that was presented by Fassbinder’s Action Theatre group in Munich in April 1968 (a production included in toto in Straub-Huillet’s celebrated 1968 short film The Bridegroom, The Actress and the Pimp), featuring many of the same actors (i.e., Hanna Schygulla, Lilith Ungerer, Irm Herrmann, Rudolf Waldemar Brem, and Fassbinder himself). These theatrical origins are clearly important, because even though Fassbinder’s film is no simple stage adaptation —- and one that pares away some elements (such as a scene in a church and some accompanying religious themes) while adding many others — the frontal framing of the actors in medium-shot offers a constant reminder of its source, thereby complicating its status as a “realistic” depiction of a particular milieu. There are also some echoes of themes in Straub’s production (especially money and an undercurrent of latent heterosexual violence). And it’s worth adding that both of these stage productions followed Fassbinder’s resurrection of a long-forgotten play by a onetime protégé of Brecht, Marieluise Fleisser (whom the film of Katzelmacher is dedicated to), Pioneers in Ingolstadt —- a play that Fassbinder would also turn into a film in 1970. 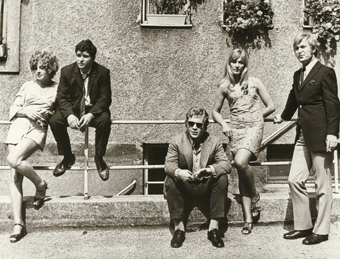 It would simplify Fassbinder’s position as well as his talent to account for the ambiguity of the film’s meaning by simply calling him an opportunist. One obvious trait that he shares with Brecht is a respect for the freedom of the viewer, a respect that entails certain calculated risks. Perhaps the most direct evidence of this trait is not in the film itself but in its original trailer, which emphasizes the breaking up of the action into individual tableaux and short stretches of dialogue —- most often between couples in simple interiors (where mainly bare white walls, familiar from Jean-Luc Godard’s features of the same period, predominate) and among several characters stationed in a line in front of an apartment building, leaning or sitting against a rail beside steps leading down to the basement and facing the camera. The trailer emphasizes this form by periodically freezing the action and superimposing key phrases from the talk as intertitles, printed in capital letters as if they were slogans in a grammar-school primer: e.g., “HE IS HE AND I AM I”; “AND ANYWAY, YOU STILL OWE ME MONEY”; “LOVE AND ALL THAT ALWAYS HAS SOMETHING TO DO WITH MONEY”; “ORDER MUST BE RE-ESTABLISHED”; and—-the last line in the film–“IN GREECE EVERYTHING’S DIFFERENT”. 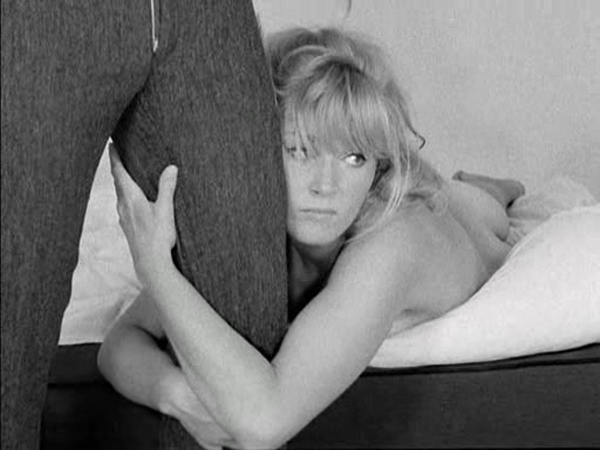 Much of this dialogue is desultory in its delivery, and most often it takes the form of domestic spats (frequently punctuated by bursts of violence) in interiors and gossip in exteriors. The camera remains motionless in all these scenes, and indeed, the only occurrences of camera movement in the film are no less ritualized–tracks proceeding ahead of two characters at a time, usually women, as they walk down the street, invariably accompanied by Peer Raben’s offscreen piano performance of Schubert’s German Dance, Op. 33 No. 7.

Fassbinder once outlined the film’s plot in a sarcastic program note, reproduced below with the actor’s names added:

“Marie (Hanna Schygulla) belongs to Erich (Hans Hirschmüller). Paul (Rudolf Waldemar Brem) sleeps with Helga (Lilith Ungerer). Peter (Peter Moland) lets himself be kept by Elisabeth (Irm Herrmann). Rosy (Elga Sorbas) does it with Franz (Harry Baer) for money. In the back court, in the pub, in their flats, they meet singly, in couples, as a group, and exchange opinions, become aggressive, get bored, piss off one another, drink. That Helga, who belongs to Paul, gets involved with his friend Erich, that Peter is getting fed up being bossed around by Elisabeth and works off his anger on the purchasable Rosy, that Paul sometimes goes to handsome Klaus (Hannes Gromball), that Gunda (Doris Mattes) is teased because she can’t get anyone, does not make any difference to the isolation of their lower-middle-class suburban haunt. That’s what it’s like, that’s normal, everything is as it should be. Only when Jorgos (Fassbinder), ‘a Greek from Greece,’ breaks into their world and with his ‘no understand’ triggers xenophobia, potency envy, aggression against the stranger, in short, the fascist syndrome, do the men wake up, rouse themselves and beat him up. ‘Things have to be sorted out around here again.’”

The repetition of the phrase “belongs to” —- an interesting variant of which turns up in one of the film’s best lines of dialogue, spoken by one of the women just after Jorgos gets beaten up by the men: “It had to happen; he was walking around as if he belonged here” — is as telling as the recurrent references to money in the film’s dialogue. One is constantly aware both that these characters have nothing and that what they have or don’t have is virtually all that they have to talk about. And Fassbinder takes care not to sentimentalize his own character, Jorgos, suggesting that he may not be much better than the others — or, for that matter, very different. Even though he’s exploited by being charged extra rent — with the full approval of the others, who brandish the excuse that because he’s a foreigner, he couldn’t tell the difference anyway –- he’s no less expedient when it comes to exploiting Marie. After having earlier admitted that he has a wife and kids back home — something he promptly forgets about when he invites her to return to Greece with him — he can only feign miscomprehension, ‘No understand,’ when she asks him about this discrepancy. This implies as well that he may be just as hypocritical to her about their relationship as she sometimes is to her neighbors. 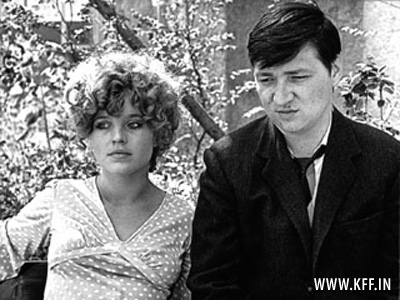 An important part of what makes Katzelmacher so exemplary in establishing Fassbinder’s style and vision, which he would then develop over most of the remainder of his career, is that even though the characters’ behavior tends to be stereotypical, the characters themselves seldom are. For all their crankiness and narrowness, they live and breathe, virtually glorying in their contradictions. 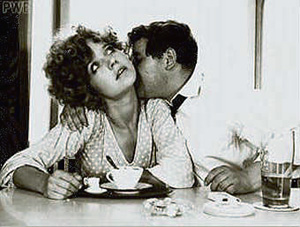