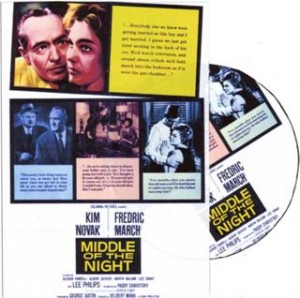 Just a brief postscript to my recently posted “Kim Novak as Midwestern Independent”. If memory serves, I hadn’t seen this profoundly depressing piece of New York Chayevsky realism since I was 16, when it came out. Now it comes across, for better and for worse, like another version of Mikio Naruse depicting the shallow rewards and prospects of the urban, aging lower-middle-class. What’s distinctly un-Naruse-like, though, is Kim Novak, who brings a nervous, almost hysterical energy to her part as the divorced, 24-year-old secretary, girlfriend, and fiancée of a middle-aged widower and garment-industry worker (Fredric March), almost as if she were trying her hand at a Method performance. The fact that I can only believe in her character part of the time stems from the fact that I can so easily see her trying. Still, the mood swings of her character are often terrifying and believable in a way that even seems to go beyond the demands of the material –- as if she were constantly trying on the part for size and then immediately changing her wardrobe in a fit of impatience. [7/29/08] 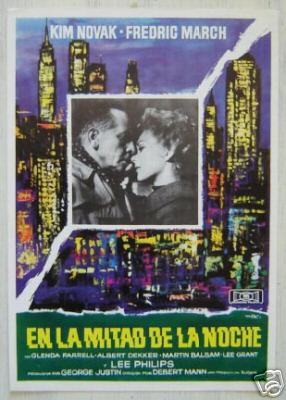