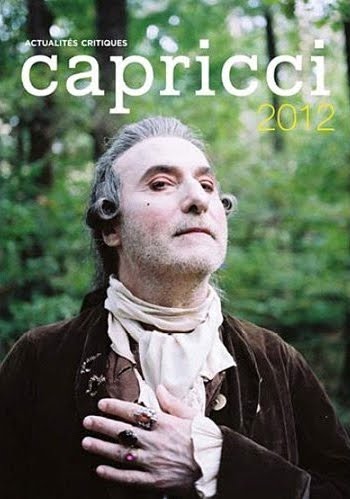 1. Film buffs who read French should be alerted to Capricci 2012, subtitled Actualités Critiques –- the second issue of an annual book-size magazine, a little over 200 pages in length, tied in various ways to some of the recent publishing activities of Capricci, many of which I’ve blogged about in this site in the past (e.g., LES AVENTURES DE HARRY DICKSON: SCÉNARIO DE FRÉDÉRIC DE TOWARNICKI POUR UN FILM [NON RÉALISÉ] PAR ALAIN RESNAIS in 2007, J. Hoberman in French in 2009, two books by or about Luc Moullet along with a DVD of his short films in 2009, and, 2011, LA SAGA: CINÉASTES, DE NOTRE TEMPS: UNE HISTOIRE DU CINÉMA EN 100 FILMS).

Edited by Thierry Lounas, the director of Capricci, Capricci 2012, which can be ordered for 18,81 Euros from French Amazon, includes, among several other items, 20-page dossiers on both James L. Brooks and Wang Bing (mostly drawn from exclusive interviews); a very polemical chapter from Luc Moullet’s autobiography-in progress De l’art and et d’un cochon (most of which is slated to be published only posthumously) devoted to his notorious 1981 TV documentary about teaching himself how to swim, Ma Première Brasse (in which he reveals, among much else, that he actually had no desire to learn how swim, a project he embarked on only so that he could make a film about it); a French translation of the Prologue of Hoberman’s latest book, An Army of Phantoms; a 14-page interview with Otto Preminger conducted in 1971 by Annette Michelson for a still-unseen Cinéastes, de notre temps TV documentary, currently scheduled to premiere at a Preminger retrospective to be held at the Locarno film festival (an interview so contentious and unyielding that Preminger virtually concluded it by calling Michelson an evil woman), and other features dealing with everyone from Charlie Sheen to Albert Serra.… Read more »