Why I Can’t Write about THE ILLUSIONIST

I’ve been asked more than once to comment on Sylvain Chomet’s recent animated feature based on a Jacques Tati screenplay — something I’ve frankly been avoiding, for reasons that I’ll try to explain.

Last February 16, I received a very lengthy email from Richard Tatischeff Schiel McDonald, identifying himself as the middle grandson of Tati, and expressing his upset and anger about this film, which I was hearing about for the first time from him, and requesting that I make some of the information  he was conveying to me better known if I planned to write about the film. I wrote him back the next day, and a week later he wrote me again: “I must admit to finding myself in a slightly uncomfortable position in making public the origins of my grandfather’s original l’Illusionniste script which until recently had been a very private family matter. My intentions are not to discredit my grandfather but hopefully by telling what is a very sad story I can shine a light onto a neglected chapter of his life that in part led to the creation of his professional body of work. My grandmother and all his stage acquaintances during the 1930’s/40’s always maintained that he was a great colleague as a friend and artist; he unfortunately just made a massive mistake that because of the time and circumstances he was never able to correctly address. I am sure his remorse hung heavy within him and it is for this reason that I believe Chomet’s adaptation of l’Illusionniste does a great discredit to the artist that was Tati.”

Two months later, when Kristin Thompson posted some remarks about this film (which she hadn’t yet seen either) on the web site that she shares with David Bordwell, before going on to discuss the BFI’s DVD of Tati’s Parade, I forwarded this letter to her. Then, the following fall, when I was in an airport waiting to fly to Vienna for the Viennale, I received an email from Dave Kehr asking if I wanted to comment on the film for a New York Times story he was writing. Hastily writing back that I wasn’t even sure if I wanted to see The Illusionist, I forwarded the same letter from McDonald to him as well, in order to explain why.

Given the very complicated (as well as hair-raising) story that McDonald had to tell, I can readily understand the reluctance of both Kristin and Dave to broach this matter in their separate venues. Fortunately, although I discovered this only later, Roger Ebert posted a subsequent letter that McDonald wrote to him in May on his own site, so readers can access the whole story here.

I finally saw a screener of The Illusionist last month, when I was back in Chicago for the holidays and found a disc waiting for me there. Which leads me to another reason, apart from McDonald’s letter, why I was somewhat reluctant to see it. By this time, I’d been reading quite a lot of favorable press about the film, most of which conveyed the impression that honoring this film was somehow tantamount to honoring Tati. Even after acknowledging that Chomet does have a poetic flair for composing in long shot that’s somewhat Tatiesque, I remain skeptical about the sentimental watering-down of his art that Chomet is clearly involved with, which invariably gives short shrift to the more radical aspects of his vision (such as those found in Playtime and in Parade, his last feature, which Kristen rightly identifies as his most neglected film — and which remains today almost completely unknown in the U.S.)

Recalling some of my own consternation about the late George Hickenlooper’s 1999 filming of a  substantially rewritten (and, to my mind, severely mangled) version of Orson Welles’ screenplay The Big Brass Ring, the original version of which I had helped to publish in a limited edition in 1987, I was afraid of comparable kinds of obfuscation happening here — although in this case I hadn’t (and still haven’t) read Tati’s original script. 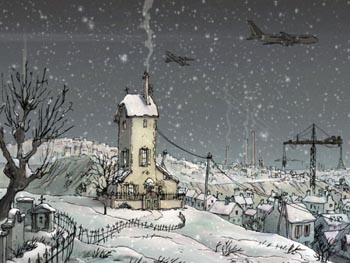 As for Chomet, about seven years ago, I briefly recommended his previous feature, The Triplets of Belleville (see the above still), in the Chicago Reader, which I’d described as “Sylvain Chomet’s Belgian surrealist cartoon feature for grown-ups…which is worth seeing for its weirdness and originality.” That film had several allusions of its own to Tati, but not ones that persuaded me that Chomet had any insights into Tati’s art that were especially instructive. And in the case of The Illusionist, quite apart from McDonald’s understandable objections, I find it highly dubious to make the magician hero not only a version of Tati himself, but, even more dubious, a version of Monsieur Hulot (notice the socks, for instance)– a character Tati had originally invented for only one film and about whom he later came to feel highly ambivalent, as I discussed in a 1983 memoir about my experience of working for him. (“The Death of Hulot,” Placing Movies: The Practice of Film Criticism, Berkeley: University of California Press, 1995, pp. 163-170 — also available here.) 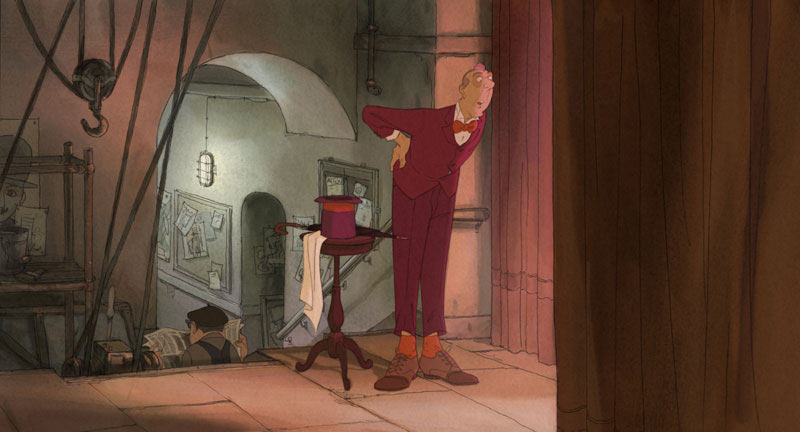 If I exclude all these problems, I would agree (or at least assume) that Chomet’s film has some merit and some charm apart from all of these issues. But for reasons that I hope are clear by now, I’m not the right one to report on this. [1/16/11]