Two (Out of Three) Luc Moullet Books & One DVD 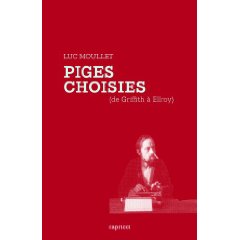 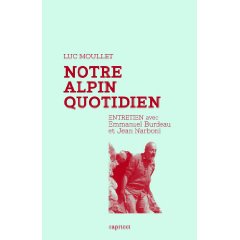 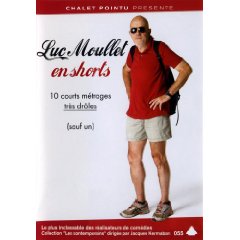 This is plainly a bumper season for Luc Moullet, who recently had an exhaustive retrospective in Paris, the release of a DVD featuring ten of his best shorts (some of which might be considered his best films), and the publication of no less than three books by him: a book-length interview with Emmanuel Burdeau et Jean Narboni (130 pages) and a long-overdue collection of his film criticism (372 pages), both published by Capricci (who were kind enough to send me copies), and a study of King Vidor’s The Fountainhead (Le Rebelle de King Vidor: les arêtes vives) published by Yellow Now that I haven’t ordered because the cost of postage from French Amazon and FNAC virtually doubles the 11,88-Euro price.

By luck, the two Capricci books and Luc Moullet en shorts (which I did pay for, postage and all) both arrived in today’s mail, and in some ways the real jewel in the bunch — or at least the item I’ve been spending the most time with so far — is the collection, Pige Choisies (De Griffith à Ellroy), which interestingly enough uses the titles of two of his best shorts, Essai d’Ouverture and Le ventre de l’Amérique, in his Table of Contents. These films are, respectively, a hilarious comic epic (1988) of Moullet trying to open a large bottle of Coke for no less than 15 minutes (which I regard as an apotheosis of the comedy of domestic frustration virtually minted in the 1950s by MGM’s Pete Smith Specialties) and an exceptionally quirky 25-minute travelogue (1996) about Des Moines, birthplace of both Jean Seberg and John Wayne. The first of these titles introduces a fascinating, self-disparaging Preface about Moullet’s half-century career as a film critic (including his early entry into Cahiers du Cinéma as a cantankerous groupie of Godard, Rivette, Rohmer, and Truffaut), which is still very much in progress. In the same Introduction, Moullet takes up the issue of antisemitism that has been debated so much recently in relation to Godard (by Richard Brody’s biography and by Bill Krohn’s very critical review of it), maintaining that, in opposition to his “very antisemitic” father, Moullet specialized in panegyrics to Jewish filmmakers — and he then offers a rather eclectic parenthetical list of examples consisting of Lang, Preminger, Lubitsch, Ulmer, Gance, Truffaut, Fuller, and DeMille. (Personally I hadn’t known about Gance or DeMille being Jewish, and Moullet himself couldn’t have known about Truffaut before Truffaut himself did. Furthermore, in some of these cases, including Lang and DeMille and quite possibly others, Moullet is apparently defining half-Jewish as Jewish, much as many people insist on defining Obama as black.)

The second title in the Table of Contents packages the fifth section (there are a dozen sections in all), with reviews or articles about W.C. Fields, Richard Brooks’ The Last Hunt, Anthony Mann’s Men in War, Chaplin’s A King in New York, Joseph L. Mankiewicz’s The Quiet American, Raoul Walsh’s The Naked and the Dead (a review subtitled, “Better than The Bridge over the River Kwai“), Nicholas Ray’s Wind Across the Everglades, John Ford, and Edgar G. Ulmer. My main disappointment is the absence of Moullet’s reviews of Jet Pilot (a near-manifesto about Moullet’s erotic preference for right-wing cinema, in spite of his deeply seated left-wing anarchism) and The Tarnished Angels. The main pleasant surprise is Moullet’s notorious but formerly unavailable polemic at Pesaro that, according to him, scandalized Barthes Metz, and Pasolini but delighted Godard, during which Moullet memorably declared, “Language is theft.” (His celebrated celebration of Samuel Fuller is also included —  but missing its last two paragraphs, which attempt to connect Fuller with Christopher Marlowe, and which Moullet confesses he now finds incomprehensible.) There’s also an attack on Spanish cinema in general (dubious) and Pedro Almodovar in particular (welcome) that he couldn’t publish anywhere else, his wonderful and extravagant 1996 defense of Raul Ruiz’s The Blind Owl, and much, much more. (By contrast, the interview book, judging from what I’ve sampled so far, is fun but relatively slight, at least compared to the shorter interview included in Luc Moullet le contrebandier, a 1993 monograph.)

It’s too bad that Luc Moullet en shorts doesn’t include any English subtitles, unlike the American DVDs of seven of his best longer films available from Facets Video. It does include an interview with Moullet and optional introductions by him, decked out in shorts and shades (see above illustration), to all ten of the shorts, which also include his very first film (Un steak trop cuit, 1960), his memorable defense of slag heaps (La cabale des oursins, 1991), and his noncomic Henry James adaptation (Le fantôme de Longstaff, 1996). There’s a curious leap of 26 years between Un steak trop cuit and the second short included, a curious item about dogs, and it’s too bad that he had to omit Barres (1984), which details various ways of  sneaking into the Paris métro without paying (a Moullet short already available on DVD in France with his 1987 feature, La comédie du travail, which similarly chronicles various kind of French welfare scams). But if you can follow the French (which isn’t really necessary with most of Essai d’Ouverture), there’s a great deal of pleasurable stuff here. [5/3/09]

Postscript (email from Barry Scott Moore, 1/19/16): I wish to question an assertion of Luc Moullet’s that you reproduce in your recent blog entry for January 18, entitled “Two (Out of Three) Luc Moullet Books & One DVD”, that Jean Seberg and John Wayne were both born in Des Moines. I had long associated Seberg with Marshalltown, and consulting today both Wikipedia and IMDb (Internet Movie Database) I found agreement from both sources that Seberg was born in Marshalltown, the seat of Marshall County, Iowa, and that Wayne was born in Winterset, the seat of Madison County, Iowa (and admittedly only some thirty miles from Des Moines, in Polk County and of course the state’s capital). These facts don’t necessarily diminish any poetic insights Moullet may have discovered in the “belly of America”, but I think they are significant in themselves.