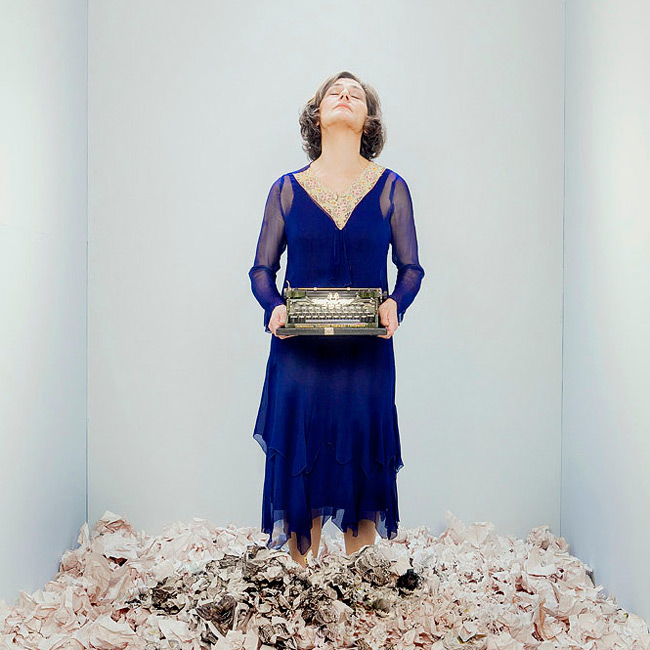 I urge any Chicagoans reading this post to rush out and see this local stage production (and world premiere), the most exciting piece of theater I’ve ever seen in this city. But I’m sorry to say that the only illustration I can access on the Internet and reproduce here is the above image, which is what’s used in the ads. [Postscript, 2/9: Lara Goetsch, TimeLine’s director of marketing and communications, has subsequently sent me four of her own photos of the production; my two favorites are reproduced below.] This isn’t bad when it comes to dealing thematically with Masha Obolensky’s play (which is about the creative processes involved in playwriting—specifically, about the processes by which real-life playwright Sophie Treadwell turned the 1927 murder case and execution of Ruth Snyder into a very successful expressionist play, Machinal, produced on Broadway with Zita Johann and Clark Gable in 1928), which bears a certain relationship to David Cronenberg’s film of Naked Lunch. (Admittedly, Cronenberg’s politically incorrect and highly idiosyncratic adaptation of William S, Burroughs is a far cry from Obolensky’s feminist play when it comes to comes to sexual politics; but even so, what this play and this film does with typewriters as pivotal props in relation to transformations between real life and fiction does seem comparable.)… Read more »