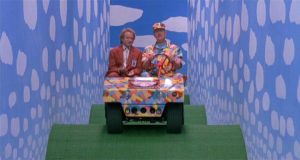 In the Gospel According to Barry Levinson, it would appear that the universe — i.e., the world, i.e., America, i.e., Hollywood, i.e., Levinson’s own brain –is nothing but one gigantic toy factory. When factory owner (Donald O’Connor) dies, he leaves the business not to his elfin and playful son (Robin Williams) but to his military brother (Michael Gambon), who proceeds to install security systems and manufacture war toys. This is a movie Levinson wanted to make for a dozen years, and it’s possible that in the long career slide from the promise and coherence of Diner he’s forgotten why. Maybe with a smaller budget and less solipsism at its center this project might have retained certain possibilities. But in its present monstrous, cacophonous, and semicoherent form it constitutes a prime example of everything it is attempting to satirize. Coscripted by Valerie Curtin; with Joan Cusack, Robin Wright, LL Cool J, Arthur Malet, and Jack Warden (1992). (JR)