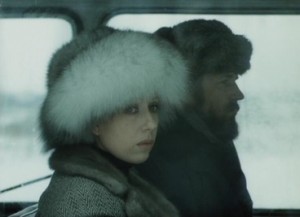 It’s not too much of a surprise that this angry Soviet film by Gleb Panfilov won the Golden Bear prize at the 1987 Berlin Film Festival over Platoon. It’s a more courageous film, especially considering the restrictions in its own country, which help to explain why this 1979 film could only surface after glasnost; it’s also a more impressive piece of filmmaking. Its novellalike plot follows a trip to the country taken by a celebrated middle-aged playwright (Mikhail Ulyanov) who has recently come to feel contempt for the compromises and complacencies of his own career. He develops an interest in an attractive young tour guide (beautifully played by Panfilov’s wife, Inna Churikova), whose low opinion of his work helps to focus his own self-hatred. But this masochistic attraction is frustrated when he discovers that her heart belongs to a young unpublished Jewish poet who, unlike him, has risked his career for his work and who, reduced by the authorities to a job as a grave digger, is planning to emigrate. Panfilov’s narrative style (the hero’s acerbic offscreen narration effectively punctuating the action) and visual distinction (a memorable use of snowy landscapes creating a striking black-and-white effect to play off against the color) keep this powerfully acted drama watchable even when little is happening. As a rare glimpse into contemporary Soviet attitudes toward officialdom and privilege, it has a great deal to tell us. With Stanislav Lyubshin and Yevegeny Vesnik. (Facets Multimedia Center, 1517 W. Fullerton, Friday and Saturday, April 15 and 16, 7:00 and 9:00; Sunday, April 17, 5:30 and 7:30; and Monday through Thursday, April 18 through 21, 7:00 and 9:00; 281-4114) 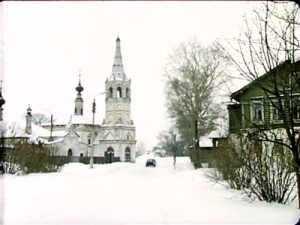