A Prayer For The Dying 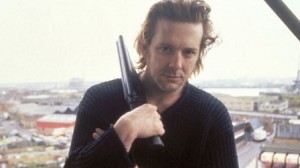 Mickey Rourke is an IRA terrorist tired of killing and looking for a way out of the United Kingdom; Alan Bates is a London mobster doubling as a mortician who offers him an escape route if he bumps off another crook; Bob Hoskins is a priest who witnesses the latter murder. It’s theoretically possible that there was once something more to this than the disjointed thriller now on view: director Mike Hodges and Rourke have both disowned producer Peter Snell’s extensive reediting of Hodges’s cut, which apparently strips down the atmospherics for action, and Bates and Hoskins have gone on record as preferring the original version as well. In the film as it stands, Bates is ghoulishly good, Rourke impossibly angelic, and Hoskins seemingly bemused by his part; neither intimations of The Informer and Odd Man Out nor Bill Conti’s wallpaper score can redeem the awkward cross-purposes. With a screenplay by Edmond Ward and Martin Lynch. (JR)