I’m pretty sure that my very first contributions to the Chicago Reader were these two capsule reviews, commissioned by Dave Kehr for their November 5, 1982 issue when these films were playing at the Chicago International Film Festival. — J.R. 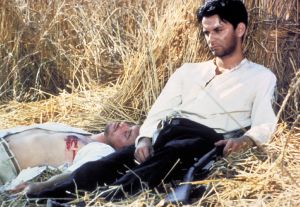 The Night of the Shooting Stars.

The seventh feature written and directed by the talented Taviani brothers – Vittorio and Paolo, born respectively in 1929 and 1931 in San Miniato, Italy – and the third to open in America, The Night of the Shooting Stars is an Italian memory film that belongs to the same respectable company as Bertolucci’s The Spider’s Strategm, Fellini’s Amarcord, and Scola’s We All Loved Each Other So Much. The Tuscan town of San Martino during the last days of the war in 1944, as recounted by a woman who was six at the time to her daughter, provides the framework for this passionate and volatile fresco-in-motion, which radiates with unexpected and even startling moments of bucolic poetry. The actual war sequences contain some of the shocking beauty and giddy surprises one associates with the great Soviet directors, Dovzhenko in particular. The intensely communal memories of families and neighbors sharing crises and tragedies provides the heightened emotional tone, but it’s the fertile imaginations of the filmmakers that keep this movie moving, in breathless and fluid fashion, from one florid epiphany to the next. Samuel Fuller’s The Big Red One recently treated the same war from the Yankee viewpoint with a comparable amount of awe and hallucinated surrealism in the sudden transitions, but without the childlike simplicity of the Tavianis, who can turn something as artificial as move-studio stars in the sky into the convictions of personally recollected history. An absolute must, despite the recent hostile New York Times review when it showed at the New York Film Festival, which sarcastically sneered that only lovers of peasants would like it — thereby delaying the film’s national release a good three or four months. (JR) 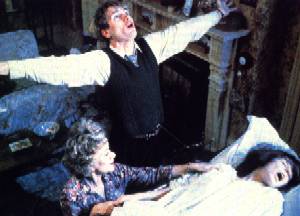 Think of it as a package, which is what British TV producer Kenith Trodd must have done: Sting, lead singer of the Police, joins forces with a pretty milkmaid from Tess (Suzanne Hamilton) and such accomplished veterans as Denholm Elliott and Joan Plowright, with dialogue by the author of Pennies from Heaven (Dennis Potter) that’s directed by the man who just brought you The Missionary (Richard Loncraine). Unfortunately, nothing much ignites or congeals, and the delivery of this combo scuttles uneasily between melodrama and whimsy, black comedy and camp, getting steadily nastier but otherwise getting nowhere. Try to imagine Uncle Ernie in Ken Russell’s Tommy “fiddling about” with a crippled niece (Hamilton) instead of nephew, who can’t talk but moans a lot – while ingratiating himself into a troubled household like Dirk Bogarde in The Servant — and you get some of the initial idea, which is made more indigestible by stylizing the simpering glamour hero (Sting) the poor girl-s frumpy naturalistic parents (Elliott and Plowright) so differently that they belong to separate movies. Without either a consistent single approach or a consistent avoidance of one, this has to get by on its deft, classy cinematography (by Peter Hannan) and nice incidental music (from Sting, the Police, and the Go-Go’s) — a pleasant enough way to get bored, but not a story with much point or focus in its present form. One suspects the original British TV series made sense. (JR)