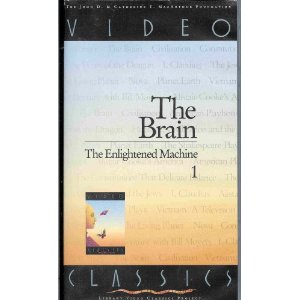 of brain research, in preparation for the eight one-hour shows. At the

same time, he acknowledges the sheer technical difficulty of representing

a subject that is so tough to visualize: “It’s amazing to try to do a series

when the star of the series is something g you can’t really see.” When I

altered during this survey, he replied without hesitation, “Everything.

complicated entity there is that I’ve encountered. It’s fascinating — ”

subject can be gleaned from the titles of the eight programs. In order,

these are “The Enlightened Machine,” “Vision and Movement,” “The

Animal Brain,” “The Chemistry of Emotion,” “Learning and Memory,”

“The Thinking Brain,” “Madness,” and “The Brain Age”. In order to

as stimulating to a more sophisticated one, the series focuses a lot

people. This includes everything from the personal struggles of

comedian Terry-Thomas with Parkinson’s disease in his daily life

to the neural networks of platform diver Greg Louganis that are

in operation whenever Louganis executes a reverse 3 ½ dive with 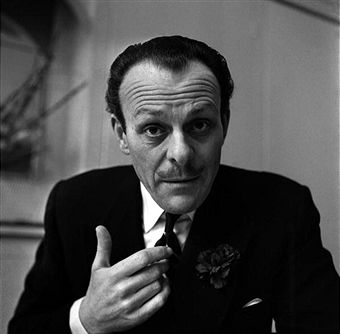 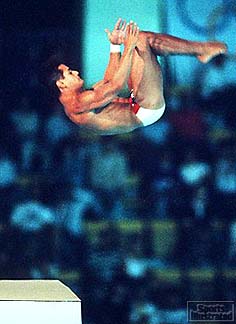 Also featured are the personal stories of many lesser-known

individuals — in some cases, people whose unusual brain

conditions have profoundly affected their day-to-day

video camera that transmits visual signals to a grid of pressure

points on his back. Mitch Heller, who lost his sexual drive and

potency after a serious brain injury, managed to father a little

girl after being fitted with an “artificial hypothalamus” on his

belt which automatically supplies certain chemicals to his brain.

Mark Larribus went from being a gentle man to an extremely

violent one when a cyst developed on his brain, and then

returned to his gentle state after the cyst was removed. And,

by means of fictional recreation — a ten-minute sequence in

“The Chemistry of Emotions” that represents the only use of

docudrama in the series — The Brain also takes up the

in the nineteenth century who underwent a disturbing

personality change after his cortex was severed from his

limbic system during an accidental explosion. 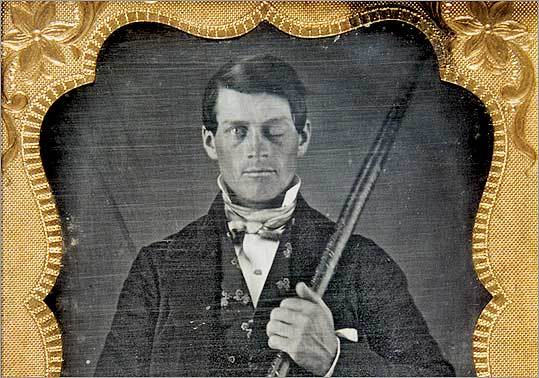 “The Animal Brain” focuses on those “primitive” aspects of the brain

that are essentially baggage from our animal ancestors, concentrating

on rhythms and drives through an examination of the hypothalamus

and pituitary — including the individual cases of Mitch Heller and

Mark Larribus, cited above. The biological clocks in the brain that

other interviews in this segment. 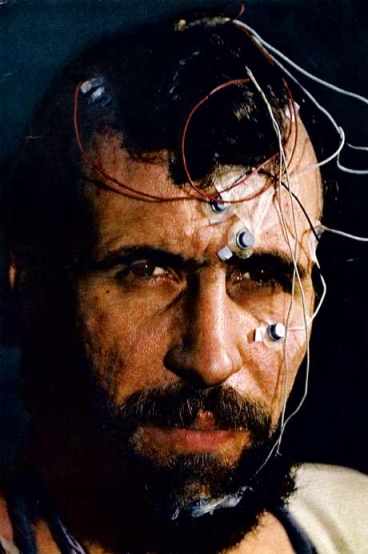 One of these is with a French scientist, Michel Siffre,

who spent six months underground in order to

investigate the performance of his own biological

clock. Siffre found that without any sort of time cues

at his disposal, he was running on a 25-hour day;

after a month, he adjusted to running on a 48-hour

day. The implication is that we know how to

regulate ourselves without even the sun to guide us. 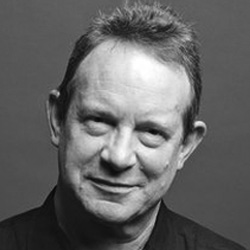 The gist of the other interview was vividly

described to me by associate producer

Peter Bull: “We all sort of get the blues in

the winter, but there are people who go

into the depths of depression, when they

can’t do anything — starting in the fall, when

the days are getting shorter, and ending in

the spring. They come out of their cocoons,

We did a whole sequence around a woman

her is amazing: when the winter months come

along, they start waking her up early in the

morning, and she sits in front of these full-

spectrum lights. Then late at night, before she

goes to bed, she does the same thing. So she

sort of artificially extends her daylight, to make

it like a summer day, and she comes right out of

In order to visualize certain brain functions, the

show is utilizing an arsenal of up-to-date techniques,

models of the brain, many times larger than life,

and then using tiny cameras with minute

boroscope lenses that can travel up and down the

blood veins in this model.

In spite of such visual aids, The Brain ultimately

faces the challenge of having to explain various

processes to an audience that is more accustomed

to thinking about the brain in terms of specific

organs. Because the actual structure of how people

look at the brain is largely what’s at issue, Richard

Hutton and Peter Bull are both hoping that the

series will turn around some of our more

outmoded thinking habits about the brain: the ways

that we think about memory, for instance. 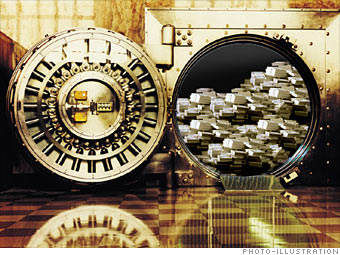 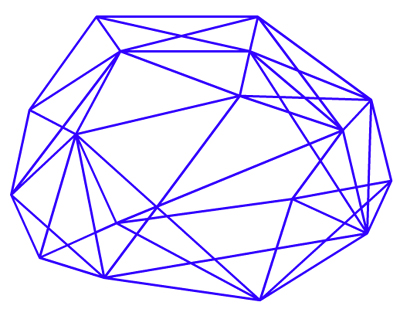 stored away as if in a bank vault, at least one commentator

has suggested that a hologram might provide a more accurate

visual model for the process of remembering. (If you remove

an entire section of a hologram, it can still basically function

as a complete entity; so too, it appears, can the brain.) As Bull

“You don’t have one cell that has, say, your memory of your

grandmother’s face, or that evening you spent with your

friend at the restaurant. You have a whole bunch of cells

that are interconnected, which, when activated by an

associative link which stimulates a series of cells,

generates your memory of having that particular

dinner.” In short, memories are put together out of

The final program in the series, “The Brain Age,”

the brain and self-awareness: the phenomenon of

the possibilities of REM sleep and dreams in a

prenatal state; the case of Tony, a multiple

personality in his late thirties who has at least

as many selves as he has years, and whose

variation on the awareness theme; and the

plight of a 51-year-old musician and music

teacher named Eleanor who is shown during

the middle stages of Alzheimer’s disease.

For Hutton, an important part of each of

these segments is not so much what we know

about the brain as what we still don’t know.

We don’t know, for instance, that fetuses

dream -– only that they have REMs, and that

REM sleep in infants and adults marks the

stage at which dreams occur. We don’t know

the precise relationship between the brain

and multiple personality, either -– unless

we note the brain’s capacity to tune out

exaggerates to a pathological degree and

makes involuntary. And we hardly know

anything about Alzheimer’s disease, which 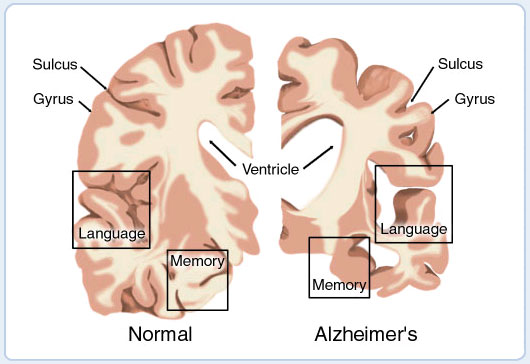 “Alzheimer’s disease is a memory story, but not really a memory

story,” Hutton notes. “What it does, ultimately, is change behavior

and personality. It’s a destruction of global awareness. If you look

on awareness as something that reaches an evolutionary fulfillment,

if you wish, in human beings, than Alzheimer’s disease probably

destroys the most human functions we’ve got.” In the case of

Eleanor, we see a woman with a master’s degree in music who

music at her church. “Her daughter followed her in music, and

now has taken over most of her roles in church. Eleanor is still

hanging on, but she’s lost a lot. She can sight-read any piece

of music you put in front of her, but she can’t make a cup of 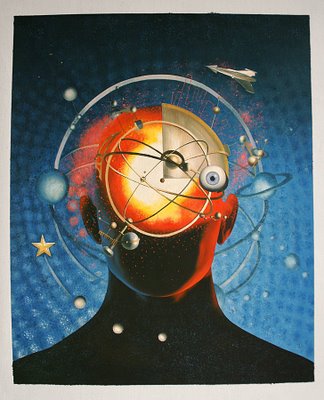 In order to rethink what the brain is, with or

without self-awareness, it seems that we need

to reflect more on interactions and processes

and less on individual parts in isolation from

one another. Indeed, from the available

evidence, it appears that interconnections

will be the message as well as the medium

of The Brain, promising an intriguing

kaleidoscope of possibilities. “If you had

to take a part of the brain that meant

something,” Hutton argues, “you wouldn’t

That, for neuroscience, is bullshit. It’s the

synapse, where two cells talk to each other.

When we understand the synapse, a lot

of things are going to fall into place. That

involves the chemistry of the brain and the

anatomy, too – because you have to worry

about which cells of the brain are talking to

which, and why they get together. If

consciousness or self-awareness or perception

emerges, as most people think, from the

organization of the brain, then dealing with

the synapse when you think of something, or will

something, or want to move your finger –- these

are all really important thoughts.”