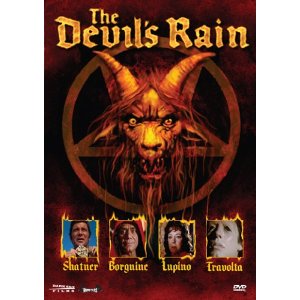 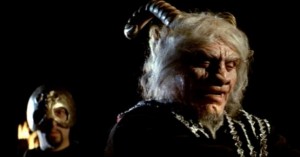 In a heavy storm, Steve Preston returns to his ranch-house on the brink of death, dissolving into a waxy liquid as he utters the name of Jonathan Corbis. His wife Emma subsequently disappears, and their son Mark [William Shatner] takes an amulet left by her (supposedly protection against Corbis’ power) and drives to the ghost town of Redstone. There Corbis [Ernest Borgnine], the leader of a Satanist cult, renders Mark defenseless by turning the amulet into a snake after Mark discovers that Emma his been enlisted into the sect. When Tom [Tom Skerritt], Mark’s younger brother, arrives in Redstone with his wife Julie [Joan Prather] to look for his family, Julie is captured and Tom witnesses a diabolical rite during which Mark, having undergone tortures, is initiated into the cult and Corbis is transformed into the devil himself. Tom returns to the Preston ranch, where Dr. Richards [Eddie Albert], a friend. of the family, explains that Corbis is the reincarnation of a 17th century witch betrayed by ancestors of the Prestons and burned at the stake, and that the Preston family has secretly preserved the ‘sacred book’ of names of people sworn to the devil which once belonged to Corbis and without which he cannot deliver those souls to Satan.… Read more »