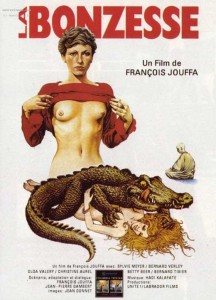 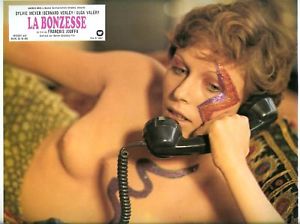 Bored with her life, Béatrice goes to work in Mme. Renée’s upper-class Parisian brothel, where she is given the name of Julie and quickly initiated into the tricks of the trade. Flashbacks suggest that she was sexually abused by her stepmother, and grew up believing that the life bf a courtesan was glamorous. On her second day at work, she is attracted to a client, Jean-François, a wealthy advertising man who chooses not to have sex with her but asks her for a date that evening. She accepts and winds up living at his flat, but he repeatedly avoids having sex with her. In desperation, she resumes work at the brothel in the daytime without telling him, then leaves him one night to go home with her friend Martine and her boyfriend. As she gradually saves up enough money to fly to Ceylon — where she hopes to attain spiritual peace — she becomes increasingly depressed by the grotesque needs of the clients who come to the brothel, the jealousy of a fellow worker, and the overall sordidness and sadness of the place. Read more 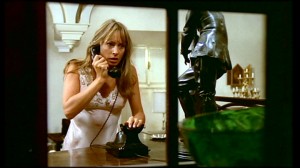 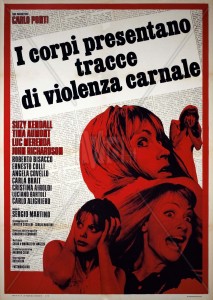 After two college girls, Florence and Carol, are savagely murdered and butchered by a masked assailant, one of their classmates, Daniela, recalls having recently seen the scarf left behind by the murderer but can’t remember who was wearing it. Before long, she receives an anonymous threatening phone call, and her uncle Nino requests that she so for a rest to his country villa with her school friends Ursula, Katia and Jane. Jane stays behind briefly to look up Stefano — a student whom she suspects is the killer, but who proves not to be at home — and passes up an invitation to attend a concert with her art professor Franz. A scarf-dealer who meanwhile tries to blackmail the killer by phone manages to collect 3 million lire, but is then run down by a car; that evening, after a local shoe-peddler spies Ursula seducing Katia in the country house, he is pursued, killed and thrown into a well by the masked assailant. Read more 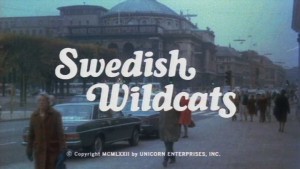 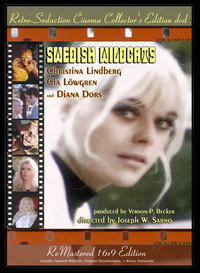 Copenhagen. Margareta, a brothel madam who displays her prostitutes in elaborate cabaret revues at private parties, summons her two orphan nieces Susanna and Karen — both part of her entourage — to participate in a ‘slave auction’ staged for some local clients. Gerhard Jensen, chief of a ground crew handling air cargo, bids for Karen and then offers to pay extra to share a room with Susanna and his friend; Margareta agrees and watches the results through a two-way mirror: Gerhard complains to Karen, “I could get more excitement from a piece of raw liver”, and tries to make love to Susanna, then beats her when she refuses to kiss him on the mouth. In a park, Susanna meets Peter Borg, another member of Gerhard’s crew; it is love at first sight, and she presents herself as Natasha, a ballet dancer, while he claims to be a test pilot working on a secret project. Meanwhile, her sister Karen has also fallen in love with someone who doesn’t know her profession — Gabriel, an architect from a very respectable family. Read more